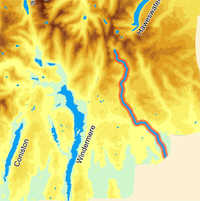 The River Kent has four very different sections. Above Staveley it runs through a narrow steep sided valley that opens up slightly around Kentmere, where it is surrounded by a circuit of imposing fells. Between Staveley and Levens it runs through rolling hills, overlooked by the fells. This section is interrupted by a brief urban stretch in Kendal. Finally, close to Morecombe Bay the Kent estuary opens up and the last part of the river runs through sand banks often covered in wading birds.

The Upper Kent is most familiar to walkers, for it is in sight for most of the Kentmere Round. Here the river runs through two

patches of open water, neither of which is entirely natural – Kentmere Reservoir was built to provide water for industry while Kentmere Tarn was once much larger, and has been partly drained to allow for the extraction of clay.

The Lower Kent has been an industrial river, powering the mills of Kendal. During the nineteenth century the wool industry was king, but the Kent also powered sawmills, corn mills and even gunpowder works.

The River Kent rises at the very top of Kentdale, in a dramatic bowl formed by the crags of Froswick, Thornthwaite Crag, Mardale Ill Bell and Lingmell End.

The Kent flows south down Kentdale to Staveley, where it turns south-east to run to Kendal. From Kendal it flows south to the coast, running into Morecombe Bay between Arnside and Grange-over-Sands.