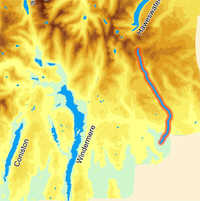 The River Sprint is the river of Longsleddale, one of the quietest of the Lake District's valleys. The valley is also one of those places where the division between the dramatic splendour of the Lake District and the quiet beauty of the Pennines came be seen to good effect – the valley is surrounded by craggy fells to the west and smooth moorland to the east. Even the course of the valley is reminiscent of the dales, flowing straight, with steep even sides. In contrast the source of the river is surrounded by crags. Like its near neighbour the Kent, the Sprint has something of an industrial heritage, still reflected in the present of a number of mills on the lower part of the river.

The Sprint is formed by the junction of a large number of small streams with Wren Gill on the eastern slopes of Harter Fell and Kentmere Pike.

The Sprint runs south/south-east along Longsleddale, running alongside the single valley road for most of its course. It emerges from the lonely hills at Garnett Bridge, and flows into the Kent between Kendal and Burneside.