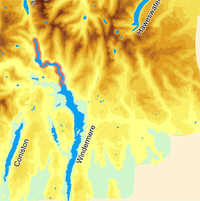 The River Rothay runs through some of the most picturesque scenery in the Lake District, passing through the heart of Wordsworth Country on its way through Grasmere and Rydal Water. Although the Rothay is familiar to just about every visitor to the area, it is only really accessible on foot between Grasmere and Rydal Water, where paths follow both sides of the river. The river bypasses Ambleside completely, although this lower stretch is followed by a minor road.

The Rothay rises on the southern side of Dunmail Raise.

The Rothay flows south from Dunmail Raise into Grasmere, then east to Rydal Water and finally south towards Windermere, joining with the Brathay just before it flows into that lake next to the meagre remnants of the Galava Roman fort.