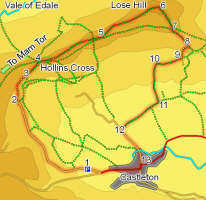 Castleton is one of the most popular tourist destinations in the Peak District, but it is still possible to find quiet paths even in this busiest of valleys. This walk runs below the dramatic eastern slopes of Mam Tor, then climbs the path to Hollin's Cross, where it crosses the popular path from Castleton to the summit of Mam Tor. Instead of following the crowds, our walk then heads east along a fine ridge that borders both the Vale of Edale and the Hope Valley, reaching a high point on Lose Hill, one of the most dramatic viewpoints in the entire Peak District.

There is plenty of parking in Castleton itself. In addition, the main road west out of the village is lined with parking places. This was once the main road to Chapel-en-le-Frith, but constant landslides on the front of Mam Tor eventually forced the abandonment of the road, which is now a dead end. The route west now takes the side road up the dramatic Winnants Pass.

We take as our starting point the roadside parking west of Castleton (If you are starting from the centre of Castleton, head west along the main road through the village to reach these parking places).

Just outside the village, the road forks. The left hand branch heads to Speedwell Cavern, Winnats Pass and the Blue John Cavern. Ignore it and take the right hand fork, heading towards Mam Tor and Treak Cliff Cavern. This road curves away to the right, and passes Treak Cliff Cavern, its entrance perched high on the hillside above the road.

This road provides some very impressive views of the Mam Tor landslide. The unstable nature of the ground to your left is very obvious, and the upper reaches of the road have now largely disappeared, although a path does follow the route it used to take. The road passes Odin Mine, where a small cave is open to the public.

The tarmac survives long enough to reach the track to Mam Farm. The right of war heads down the hill past the farm, but there is now a permissive path that runs above the farm. Pass through a gate and follow this path as it winds its way around the hillside, slowly gaining height.

3: SK 133 843
Just after passing a muddy patch, the permissive path rejoined the right of way. Our path now climbs more steeply up the side of the ridge towards Hollins Cross.
4: SK 135 845

Hollin's Cross used to stand at a low point on the ridge, marking the point where packhorse trails between Edale and Castleton crossed the ridge. Here we cross the very popular path from Castleton to Mam Tor. Our route heads east, away from Mam Tor, along the top of the ridge and over the top of Barker Bank.
5: SK 143 848

From the top of Barker Bank we can see the rest of the ridge east to Lose Hill. The main obstacle in our way is the dramatic cliff face of Back Tor. A wall runs along the top of the ridge, with our path to the south (right) of it. The path dips down into a slight gap between Barker Bank and Back Tor. At the bottom of the dip, take a chance to cross over onto the northern side of the wall.

The path up Back Tor is very obvious, running to the right of the cliff face and climbing steeply up the slope. The top of Back Tor provides us with the best views back towards Mam Tor. Our path onwards is again very clear, running along the top of the ridge towards the shapely summit of Lose Hill.

We are now at the main objective of our walk, the summit of Lose Hill or Ward's Piece. This is a fantastic viewpoint, with panoramic views in every direction. To the north and north west is the Vale of Edale, and beyond that the Kinder plateau. To the

east is the valley of the Derwent, with Ladybower Reservoir hidden behind a line of low hills. South is Castleton and the Hope valley. Finally, to the west is the ridge leading back towards Mam Tor.

The route onwards follows the obvious path heading down the hill to the south east. Castleton is to our right as we descend the hill.

The first part of this path curves gently to the right as it descends from the summit of Lose Hill. After a fifth of a mile, the path briefly levels out and crosses over a stile. Here we leave the main path, which now curves off to the left. Instead we cross over a style in the fence just to our right. Once over this second style, turn left and follow the path along the fence.
8: SK 157 847
This path follows the fence for six hundred feet, then curves slightly away to the right, passing through a line of trees and then begins to curve back to the left, becoming more of a track as it goes. Ahead of us is a group of farm buildings, but before we reach them, a signposted foot path leaves the track and heads down the slope to our right, reaching a small gate in the bottom corner of the field. Pass through this gate and head south along the edge of the next field.
9: SK 156 846
Very quickly after entering this field we reach a stile (in the field boundary to our right). Cross it and head straight out across the next field. At the western edge of this field, we join the start of a farm track, which we follow along the northern edge of the next two fields.
10: SK 152 845
At the end of the second field, turn left along the signposted footpath, heading towards Riding House Farm. The path passes through a field to the left of the farm, running alongside a steep sided gully. At the southern edge of this field, the path descends down into this gully, crosses the stream and climbs back out of the other side, before continuing south through two more fields.
11: SK 153 839

At the end of the second field, we reach the back of the Losehill Hall National Park Study Centre. Turn right onto the lane that runs behind the centre. Where this lane turns sharply to the left, leave it and follow the field path that continues on straight ahead (Ignore the "path closed" sign on the farm gate to the right - that refers to the track heading north).

This field path crosses two fields before joining a track. Continue straight ahead along this track until it reaches a minor road.

12: 147 834
At the end of this track, turn left onto the minor road that heads back into Castleton.
13: 150 830
Where this minor road joins the main road through Castleton turn right and return to the walk.