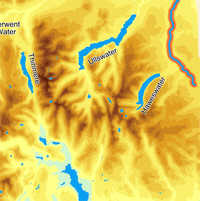 The River Lowther runs though attractive countryside on the north-eastern side of the Lake District, where the fells begin to merge in the Pennines.

For most of its route the Lowther runs through fields, in a landscape that feels more Pennine than Lakes. This changes at Askham, where the river runs through a steep sided wooded valley, with the ruins of Lowther Castle above it to the east and the very pretty village of Askham running west up towards the fells in the west.

The Lowther runs along something of a boundary, with lower ground to the east and the Fells rising away to the west. This is reflected in its tributaries - the vast majority of which flow into the Lowther from the west. The Lowther drains most of the fells east and north of Haweswater, including most of the water that flows east off the ridge that runs north from High Street towards Ullswater.

The upper reaches of the Lowther aren’t well served by footpaths. One path runs close to the river from Shap Abbey north to Rosgill, although normally some way above the water. Things then improve - the stretch from Rosgill to Bampton Grange has a path on the east bank. This is followed by a path on the west bank from Bampton almost to Low Knipe. There is then a gap before we reach a path on the west bank near Helton. There is then a path along the east bank that runs up to Askham. Finally the woodland path through Yanwath Wood runs close to the river, before leaving the National Park.

The Lowther runs past a series of interesting historical features. The first is the ruins of Shap Abbey, just a short distance to the north of Keld. This was a Premonstratensian abbey, founded in 1190 near Kendal but that moved to its current location in 1199. The Abbey survived until 1540 and the tower ruins are still impressive.

Some of the stones from Shap Abbey were used to build Lowther Castle, once the seat of the Lowther earls of Lonsdale. Sadly the interior was demolished after the Second World War and the gardens had been abandoned before that. The castle and gardners are now owned by a charity that is restoring the garden and opening the site to the public.

On the opposite side of the river is Askham Hall, also a Lowther residence. The building is currently being used as a country house hotel.

The last historical feature before the edge of the National Park is the ruin of Castlesteads, probably a pre-historical fortified site. The remains are now hidden within Yanwath Wood, but can be found along a path that branches off from the riverside right of way.

The river continues to pass interesting sites outside the National Park. At Eamont Bridge it runs past King Arthur's Round Table, a partly destroyed henge, while just a little way to the west is the rather more impressive Mayburgh Henge. Just to the east of the river at the same point is Brougham Hall, a semi-ruined fortified house slowly being restored. Finally the Lowther runs into the Eamont just to the north of the impressive ruins of Brougham Castle.

The Lowther flows north-west until it passes between Bampton and Bampton Grange, and then turns north, heading in that direction until it flows into the River Eamont close to Penrith.