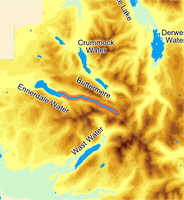 The River Liza is the river of Ennerdale, rising in dramatic isolation on the western slopes of Great Gable, and flowing west through one of the loneliest of all Cumbria valleys.

For most people the Liza is associated with the massive Ennerdale Forest, which does indeed dominate its lower stretches, but further up the valley many of the trees have now been removed, and the final mile of the valley has always free of trees.

The Liza has the rare distinction of having two very different Youth Hostels on its banks. At Cat Crag there are two refurbished forestry cabins, with many of the normal facilities. In contrast the famous Black Sail Hostel is a remote hut in a spectacular location almost at the foot of Great Gable.

The River Liza rises on the northern slopes of Great Gable

The Liza flows north-west and then west down Ennerdale, running into Ennerdale Water at Char Dub.